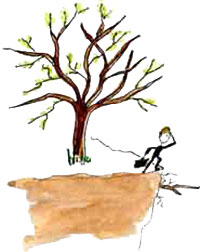 It’s taken me a long time to accept that the signs of spring—green grass, purple crocuses, yellow forsythia—can’t always be counted on to appear on schedule where I live on Cape Cod. More often than not, the dominant color of April is brown and you have to bundle up to take a walk just as you did in February.

But I’m a daily walker and the other day I donned my wool coat and hat to go out right after reading an article in the Boston Globe that said nearly four million people have been out of work for a year or more. Before the recession, 10% of the total unemployment number represented the long-term unemployed. Now it’s almost 30%. There’s no spring for these work-seekers either.

According to the article, long-term unemployment is the “most intractable” consequence of the last recession and because of a lack of political will, despite all the talk about creating jobs in the last election, few resources are being directed toward it. The problem, the Globe said, is “chronic.” They make it sound like an illness.

We no longer live in a world where going through the motions of work-search will produce results. To have any chance of success, people need keep their heads and their hearts in the game.

The thought of four million people being regarded as if they were suffering from a disease distresses me as much as the statistics. Yes, some do get disheartened and give up hope, but these are the only ones we seem to hear about. Those who stay employable by finding ways to keep themselves vital and engaged go unnoticed.

Regardless of how long someone has been out of work, his primary responsibility as an unemployed person is not sending out resumes, preparing for interviews, building networks, etc. It is self-renewal.

Being at home erodes confidence. The energy needed to step up to the plate, again and again, when you know the odds against you, can’t be sustained without actively seeking out alternative ways to feed your self-esteem and sense of professional identity. Just like a business, an individual experiences a kind of “bankruptcy” when he loses his capacity to generate new ideas.

We no longer live in a world where going through the motions of work-search will produce results. To have any chance of success, people need keep their heads and their hearts in the game. In a competitive marketplace, only a genuine belief in yourself will allow you to convincingly articulate the value of what you have to offer.

In other words, when the employment landscape seems cold, dark and barren, you’ll have to find your own source of spring, even if it means looking for substitutes.

Here are some of the ways my unemployed clients have put sources of renewal into their work-search:

In a 2000 essay, “The Coming of the Entrepreneurial Society,” Peter Drucker says, “Individuals will increasingly have to take responsibility for their own continual learning and relearning, for their own self-development and for their own careers.” In the dozen years since he made this prediction, changes in the workplace have proved him right, and yet many people, employed and unemployed, are still not taking his advice.

For everyone in my home state, April 8th, the day of the first Boston Red Sox game at Fenway Park always marks the beginning of a new season of hope. And there are now enough long-term unemployed people in Massachusetts to fill the stadium twice. If I could somehow speak to all of them, I’d ask them to believe in themselves as much as they do in the Sox, and then go out and find ways to sustain that Opening Day devotion to make their work-search a success.